Turkish singers on way to Eurovision on behalf of other countries 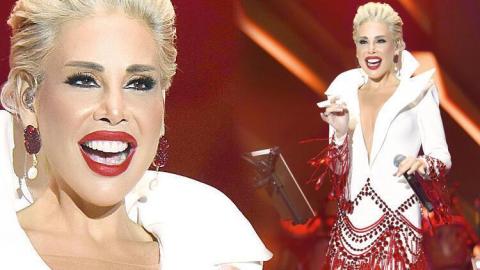 Turkey's decision not to participate in the Eurovision Song Contest this year too has again left the fans disappointed, but some singers of Turkish origin will be competing to be a part of the iconic show on behalf of other countries.

Linet, a well-known name in Turkish pop and Middle Eastern music, has succeeded in entering the next round of "The X Factor Israel," which will select the country's representative for the Eurovision Song Contest 2022 to be held in Italy.

The Tel Aviv-born singer mesmerized the audience and jury members, including Netta, who won the 2018 Eurovision Song Contest with the song "Toy," with her impressive performance.

Among competitors in the show is Sapir Saban, a singer from a Sephardic family from Turkey's Aegean city of İzmir. The 26-year-old was the winner of "The Voice Israel" in 2017.

The four finalists of the X Factor will battle at the Israeli national final for the golden ticket to the international contest.
Meanwhile, Alan Dere, a Turkey-origin singer from Switzerland, has been on the way to representing the country at Eurovision.

Born in La Chaux-de-Fonds, better known as the son of Turkish folk singer Seher Dilovan, the 20-year-old musician participated in the national qualifiers with his song, "Right Person Wrong Time."

Since Turkey decided to withdraw from the contest in 2013 on the ground that changes in the voting system are unfair, Turkish fans have missed out on feeling the Eurovision spirit in the last nine editions but always kept their hopes alive for the next show.

Every year rumors surfaced regarding Turkey's Eurovision come back, but eventually, those rumors were put to rest as officials always refuted them and continued to stick to its decision of not...