Democracy Digest: More Talk of an Axis of Rightists in the European Parliament 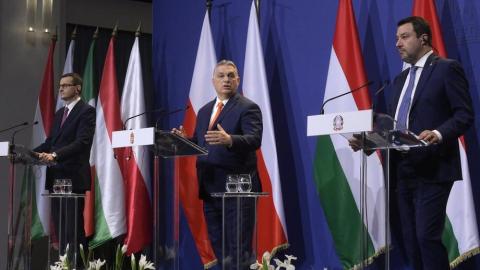 The politicians underlined that the declaration signed by 16 right-wing parties in July to protect nation states and traditional values in the EU was a clear success and, as Havasi emphasised, "has aroused great interest across the continent and several parties indicated their intention to join it."

He added that the European party families of Lega and PiS - Identity and Democracy (ID) and the ECR, respectively - are continuing negotiations this week about concrete forms of future cooperation.

Orban, whose Fidesz party sits currently with the independents in the European Parliament after having flounced out of the centre-right European People's Party before being kicked out, has long planned to bring the different groupings of conservative, right-wing and far-right, nationalistic political parties under one umbrella.

Despite clear disagreements between PiS and some ID parties, especially on future relations with Russia, Orban is continuing to try to bridge the gap between the two sides. The visit of Marine Le Pen, leader of France's National Rally, to Budapest last week fits into this picture.

Surprisingly, the news about the videoconference with Salvini and Morawieczki did not get much traction in the Hungarian media, not even in the government-friendly outlets. Little is known about the parties that, according to Havasi, have indicated their intention to join the declaration vying for a ...

Replica of ancient boat to sail to Spain