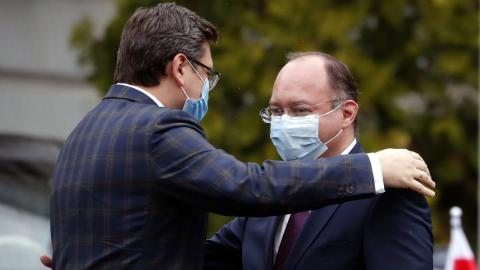 The Romanian Foreign Ministry said that state secretary Dan Neculaescu called on Ukraine on Friday to stop recognising Moldovan as a separate language from Romanian.

The ministry said in a statement that Neculaescu asked the visiting deputy head of the Ukrainian president's office, Ihor Jovkva, to respond to Romania's previous requests for Kyiv to accept the "non-existence of the so-called 'Moldovan language'".

Moldova's declaration of independence from the Soviet Union, adopted in 1991, stipulated that the state language in Moldova is Romanian.

However, Ukraine is guided by the Moldovan constitution, which stipulates in Article 13 that the "Moldovan language" as the country's national language. The article was introduced in 1994 by the pro-Russian Agrarian Party and the Socialist Party.

Since then, this has been one of the primary sources of disputes between pro-Russian and the pro-European and pro-Romanian parties in Moldova.

In June, Romanian Foreign Minister Bogdan Aurescu asked his Ukrainian counterpart, Dmitro Kuleba, for Kyiv to accept that the Moldovan language does not exist. He made the same plea in April this year.

State secretary Dan Neculaescu also called on Friday for a solution to the problems of the Romanian ethnic minority in Ukraine, which wants its children to be educated in Romanian. Ukraine however wants to move to a system in which all pupils are educated in Ukrainian.

In March this year, two Romanian language schools in the Odesa region were transformed into branches of a Ukrainian school,...