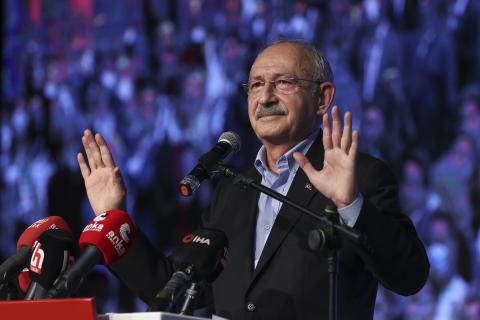 Main opposition Republican People's Party (CHP) leader Kemal Kılıçdaroğlu announced his party's six-step plan for women in Turkey to be implemented within six months if they come to power.

"I outlined what we would make up for young people in the first six months of our rule. Now it's time to announce the quick steps we will take for women," Kılıçdaroğlu said on Nov. 7 in his video message on social media.

Their fight against violence toward women will begin immediately and the CHP will re-enforce the Istanbul Convention within the first week of the government if they take office after elections, he said.

"Specially authorized courts dealing with cases of violence against women and a separate criminal chamber will be established in the Supreme Court," he said, adding that all prosecutors, judges and those working in judicial institutions will receive special training on the subject.

Their government will consider housewives and stay-at-home mothers as legal jobs, Kılıçdaroğlu said, noting that they will create a "New beginnings fund" for divorced women and a "Strong Women's Health Project."

Each police station will have teams trained in domestic violence, and at least one of them will be a woman. A communication channel will be established between the police and the family doctor so that violence can be reported by family physicians as well, he said.

"I will take steps to increase women's employment in the first six months. Another important goal is to support...