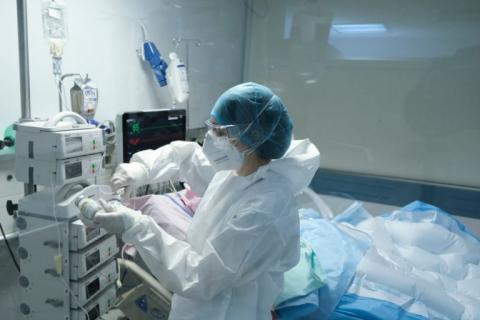 With many hospitals in northern Greece and Thessaly at the verge of collapse due to the enormous and steadily growing number of COVID-19 cases, the government is poised to proceed with the conscription of private doctors if they continue to ignore the government's plea for them to join the battle to prevent a disaster in the National Health System.

"We are at the verge of going ahead with conscription if necessary and if private doctors do not respond," said Health Minister Thanos Plevris.

Given the dire situation at hospitals in various regions of the country, the government is reportedly in the process of threshing out a Plan B, the details of which are not yet clear.

What is certain is that the government has ruled out another lockdown. Prime Minister Kyriakos Mitsotakis in a recent interview said that the situation has not spun out of control.

The health ministry will issue a final call for private doctors to help staff state hospitals - the only ones that treat COVID-19 patients - and if they do not respond the government will go ahead with conscription, as STAR television reported.

The hardest hit regions, where the vaccination rate is exceptionally low, are Central Macedonia (including Thessaloniki, Greece's second largest city, where even large hospitals are at the breaking point), Eastern Macedonia and Thrace, and Thessaly.

Over the last days, hospital doctors have appeared on newscasts to issue impassioned pleas for backups, and some have said their hospitals are treating patients on cots borrowed from other hospitals.

The president of the Association of Athens-Piraeus Hospital Doctors (EINAP), Matina Pagoni, painted a grim picture today of the...