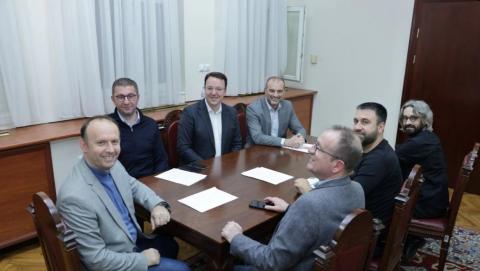 North Macedonia's main opposition VMRO DPMNE party on Monday filed a no-confidence motion against Prime Minister Zoran Zaev, sticking to its promise to do so unless Zaev resigned by the 2.30pm ultimatum it gave him.

The MP and VMRO DPMNE vice-president Aleksandar Nikolovski confirmed this at a press conference in Skopje.

"The government led by the Social Democrats and the DUI [the junior ruling Democratic Union for Integration], did not score significant results in the previous five years, but on the contrary, rules by fraud and bargaining, at the expense of the most important issues for the people," the explanatory notice behind the no-confidence motion reads.

"Instead of preserving the dignity of the state and its citizens, they are sinking the people deeper and deeper into poverty, into rising inflation and scandals that are multiplying on a daily basis," it added.

According to parliament's rulebook, a vote on a no-confidence motion takes place three days after it is filed, meaning that the date for the actual vote in parliament will be Thursday.

Nikolovski said he expected "at least 61 MPs [in the 120-seat parliament] to vote for no confidence on Thursday", after the small ruling BESA party switched sides and joined the opposition on Friday last week, giving them the needed edge.

But as each individual MP may tip the balance in one direction or another, the uncertainty over whether this new majority will hold continues.

Skender Rexhepi, MP from the small opposition "Alternative" party on Monday said he was duped into signing the opposition initiative, not knowing he would be on the same list with another smal party, Levica, and hinting at second thoughts.

"Under no circumstances will I accept to see my...