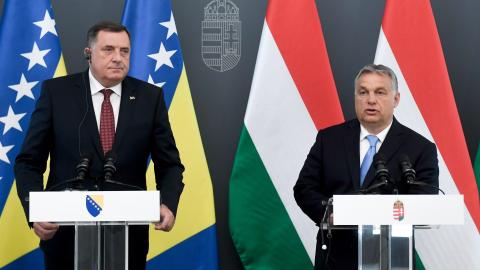 Orban led a high-level Hungarian delegation that visited to Dodik's hometown Laktasi in Bosnia's Serb-dominated Republika Srpska entity on Saturday. He said he intended to return a favour after Dodik's visit to Orban on September 24, yet details of the Bosnian visit remain sketchy.

Balazs, a former foreign minister and two-times ambassador, questioned whether the visit was coordinated with the EU and warned that it could cause considerable tensions with Brussels. The EU is currently seeking to get Dodik to step back from threats to take Republika Srpska out of Bosnia and Herzegovina's state-level judiciary, indirect tax system and armed forces - moves which have been described as steps towards secession.

The mystery is even greater given the fact that the Hungarian delegation, which included Minister of Foreign Affairs and Trade Peter Szijjarto, used both the government's planes - not just the Dassault Falcon business jet used by Orban, but also the larger Airbus A319, which is used for military transport, landed in Banja Luka. According to Flightaware.com, the A319 made a stop in Belgrade before arriving in Bosnia.

After the first part of the visit, the rest of the delegation left while Orban remained for a private lunch with Dodik, also visiting his private distillery.

Despite the fact that both Orban and Dodik love public attention, the visit was not covered much by local media, which Bosnian Serb sources said was on the specific request of Orban.

Istvan Szent-Ivanyi, Hungary's former ambassador to Slovenia and an expert on the Western Balkans, said that Orban's visit relates to his regional ambitions.

"Orban is looking for vassals in the Balkans, politicians who accept him as a regional leader and with whom he can have...