In Albania, a Worrying Rise in Drug Gangs Hiring Minors 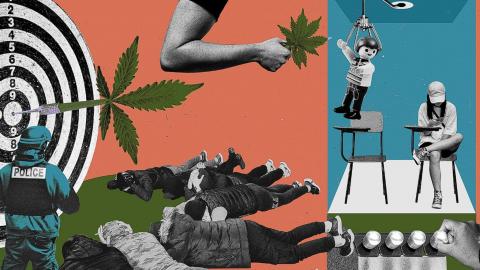 Under questioning, he admitted selling drugs for a dealer who paid him a fixed monthly wage of 10,000 leks, or roughly 82 euros. He refused to name the dealer.

The boy is one a growing number of minors used as distributors by organised drug gangs operating in densely-populated districts of Tirana, in exchange for a meagre wage.

Experts and officials say criminal groups are increasingly targeting minors from poor families, knowing that if caught and able to prove they are using the drugs themselves the case is unlikely to be escalated or result in heavy penalties.

According to BIRN's findings, over the last few years a growing number of minors in Albania have been lured into drug use as a prelude to recruitment by their dealers.

"These minors are being exploited for distributing drugs in very small quantities, such as cannabis or heroin, but they are often tempted to try them," said Elina Kondi, a Tirana prosecutor dealing with juvenile crime. "If they can prove they are users they face no penal consequences."

Albania is notorious as a major producer of cannabis and a transit country for drugs such as heroin or cocaine.

In 2018, almost 30 per cent of inmates in Albanian prisons were there because of drug offences.

Sixty per cent of cases were in Tirana, where police have identified 16...