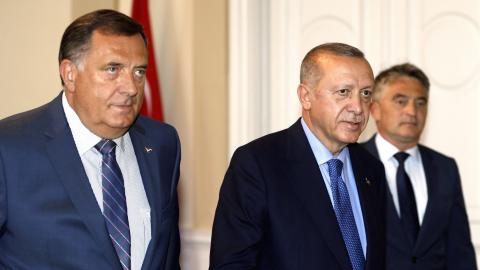 Dodik sounded a conciliatory note on Tuesday, however, tellling media that dialogue was needed on all open issues, involving Serbia, Croatia and Turkey.

"The goodwill of [Serbian President Aleksandar] Vucic, Erdogan and [Croatian President Zoran] Milanovic can be useful, but everyone else should agree on that," Dodik said, adding peace has no alternative and "the threat of force cannot solve any problem".

At che closed meeting in Turkey, Dodik and Erdogan discussed a possible meeting led by Turkey with the leaders of Bosnia, Serbia and Croatia.

"The information Erdogan has received so far has been one-sided," Dodik said before his visit, adding that he would further explain the situation to the Turkish President.

Dodik praised Erdogan as "a man who is not prepared to do anything in Bosnia and Herzegovina that would be harmful for Serbs and Croats".