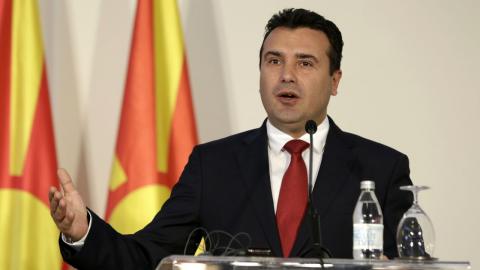 North Macedonia's Social Democratic PM Zoran Zaev late Tuesday postponed his announced resignation indefinitely, to try to sustain the current fragile majority in parliament and get the country out of its political crisis.

"It is important not to let the country go back to a past marred by quarrels both at home and abroad, not to jeopardise the Euro-Atlantic process, and because we are still dealing with the pandemic and the energy crisis," Zaev said after a central committee meeting of his party.

This would mean "a temporary postponement [of his resignation] to attempt to keep the parliamentary majority on the side of the Social Democrats. I sincerely expect that the democratic majority will stabilise", he added.

The Social Democratic central committee also postponed the announced resignations of the party leadership. "Today's decision means we should all be up to the task," a member of the the central committee, Pero Kostadinov, told the media.

The moves come one day before Thursday's no-confidence vote against Zaev's government, which the main right-wing opposition VMRO DPMNE party filed in parliament on Monday.

The vote will reveal which side currently holds a majority in the 120-seat parliament, or whether snap elections lie ahead.

The opposition maintains it now has at least 61 MPs on its side, while the ruling Social Democrats insist they will try to hold on to the support of at least 62 MPs. Both sides over the past three days have hinted that more MPs might join them soon.

The political crisis erupted after the government's unexpectedly poor results in local elections. Zaev then on October 30 announced his resignation both as premier and as leader of his party.

However, he insisted that the majority...