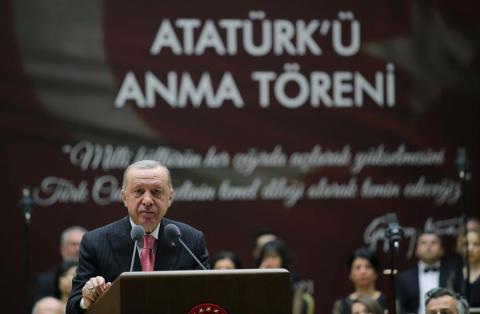 Turkey is approaching its targets of overcoming global crisis successfully, said the country's president on Nov. 10 in his speech commemorating Mustafa Kemal Atatürk, the founder of modern Turkey, noting that the outcome of his achievements is "the road map of Turkey."

"Remembering him [Atatürk] is, of course, important, but determining the reasons behind his struggle correctly is more important," Recep Tayyip Erdoğan said at the Presidential Concert Hall in the capital Ankara on Nov. 10.
Reminding about the construction of the Türkevi Center across the U.N. compound in New York, he said, "We built the Türkevi and gave messages to somebody else in a good way. The outcome of what he achieved is the road map of Turkey today."
He also criticized the main opposition Republican People's Party (CHP), which was established by Atatürk on

Sept. 9, 1923. "If he [Atatürk] was alive today, he would chase them with a stick," Erdoğan noted.
"If there is anyone in this country who protects the political, diplomatic, economic and military legacy of Gazi, it is us," he said.

"Those who take shelter behind the name of Atatürk, for God's sake, what are they doing?" he asked.
Erdoğan also attended the official ceremony in Anıtkabir, Atatürk's mausoleum in Ankara, early on Nov. 10.
"We will never allow the integrity of our country, the survival of our state, the unity, peace and ancient values of our noble nation to be attacked," he wrote in the memorial book of Anıtkabir.

Paying his respects to the country's founder and leader of its independence movement, Erdoğan said: "We continue to enlarge and develop our republic, which you established and entrusted to us, and to make it the shining star of its region and the world, despite the...