Nearly half ton of drugs seized in border city 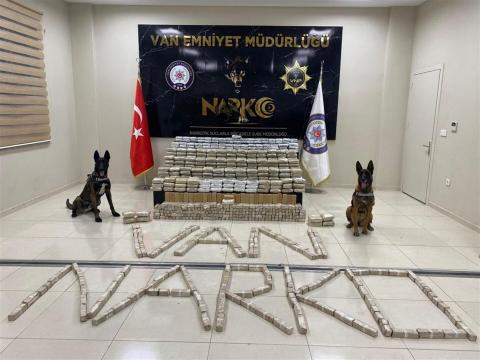 The drugs were seized in anti-narcotics operations conducted by police in İpekyolu and Tuşba districts of Van, a province bordering Iran that lies on a main route carrying most illegal drugs from production sites, mainly in Afghanistan, to Europe.

The heroin, which was hidden in 922 packs, was seized with the help of three sniffer dogs, Xena, Zeus and Bobi, while two suspects, whom are believed to be connected to the drug stash, were detained.

More than three kilograms of synthetic drugs and nearly two kilograms of opium were also confiscated as a result of the detailed search.

The investigation against the suspects is ongoing, while they were expected to be referred to a local court following their procedures at a police station.

Last month, Turkish police seized 876 kilograms of heroin in Van and the neighboring Hakkâri province, according to the country's interior minister.