Turkey to give booster shots to all adults: Minister 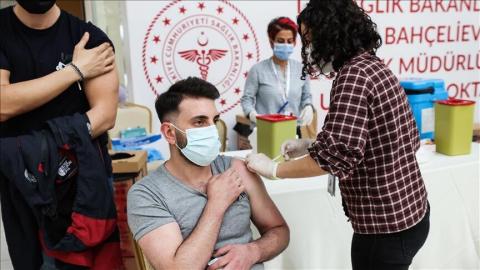 Turkey will offer booster shots of the COVID-19 vaccine to all its citizens aged 18 and older starting on Nov. 11, the country's Health Minister has announced.

Speaking after the Health Ministry's Science Board meeting held on Nov. 11, Fahrettin Koca reminded that the country was already giving the third dose of the vaccine to those who are aged above 60.

"Following the assessments at the board's meeting, a decision emerged regarding the process for giving an additional shot to adults. Anyone older than 18 years of age who were administered an mRNA vaccine at least six months ago can receive the third dose," Koca said, adding that people could choose between the vaccines as the booster dose.

Turkey, which started its inoculation program in mid-January, has been using both the Pfizer/BioNTech's mRNA vaccine and the jab developed by the Chinese firm Sinovac. The country has been giving the third doses for some time to the recipients of the Sinovac shot.

The minister said that the board also discussed the issues related to the development of the local coronavirus vaccine candidate, Turkovac.

Some 3,000 volunteers are needed to finalize phase 3 studies for the homegrown jab, and to date, 2,000 people have volunteered, Koca informed.

"We still need 1,000 more volunteers. I invite our citizens aged between 18 and 59, who have received two doses of the COVID-19 vaccine, to volunteer for Turkovac," he said.

Koca also stressed that the daily number of new infections did not show sudden and steep increases, keeping caseloads for hospitals and the health system at manageable levels.

But the minister noted that just over the past month up to 85 percent of the deaths due to COVID-19 occurred among the elderly.