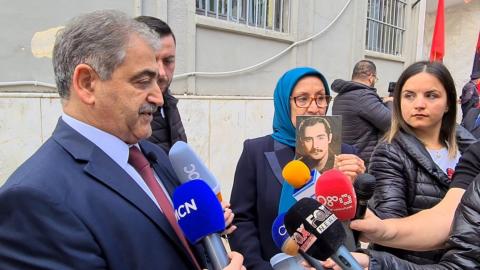 The trial of a former Iranian official accused of crimes against humanity, arrested in Sweden, has moved to Albania, where several members of an Iranian exiled opposition group People's Muhajedin of Iran, MEK, based in Albania since 2013, will testify.

Hamid Nouri was an assistant prosecutor during mass executions of the Iranian opposition group in 1988. He was arrested in Sweden in 2019 and is charged with war crimes. The UN deemed the massacre a "crime against humanity" in 2018.

The first trial session in Durres, Albania, opened on Wednesday. Media have reported that seven MEK members will testify, and their testimonies are vital to the case.

Faride Gudazi told the media she was arrested in 1983 in Iran "because I was supporter of the People`s Muhajedin Organization of Iran and I was imprisoned for six years. I was a witness to the massacre in 1988 in Iran when 30,000 people were executed and 90 per cent of them were members of the Muhajedin organization", MEK member Gudazi said.

"In the summer of 1988, in a matter of 20 days, all the political prisoners were put in front of the 'death committee' and 90 per cent of them were executed", she added, showing a photo of her brother who was also one of the executed.

Most sources put the death toll closer to 5,000.

According to BBC, Nouri is the first former Iranian official to face a trial for what happened in Iran in 1988.

"Never before has anyone been criminally prosecuted over the mass execution and torture of political prisoners in Iran in 1988. Mr Nouri was arrested and later charged over his alleged role, which he denies," it said.

The executions were ordered by Iran's then supreme leader near the end of the war between Iran and Iraq.