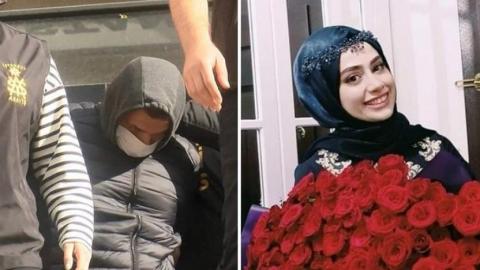 In yet another case of femicide, a woman has been brutally murdered in broad daylight with a samurai sword while she was walking on a street in Istanbul.

Başak Cengiz, a 28-year-old woman, was attacked by Can Göktuğ Boz out of nowhere with a samurai sword while she was walking on a street of a housing estate where she resided in Istanbul's Ataşehir district late on Nov. 9.

The suspect fled the scene on foot with a 75-centimeter-long sword, while Cengiz, who was left heavily injured following the brutal attack, was rushed to a hospital immediately but succumbed to her wounds despite all interventions.

Police officials detained Boz, a 27-year-old university student, as soon as they identified him in CCTV footage and an investigation was launched into the murder.

According to police sources, Boz explained the details of the murder he committed with great calmness in his three-page testimony. He also confessed that he had decided to kill a woman while leaving his house in case a man would resist him, the sources said.

Boz was arrested on Nov. 10 by a local court on the charge of "deliberately killing with a monstrous feeling" following a police raid conducted to his residence that found 15 different cutting tools, including the samurai sword.

Pieces of papers believed to contain "motivational messages" to commit the murder were also found during the search at the residence of Boz, who reportedly lives alone.

Speaking to Demirören News Agency, Boz's neighbors claimed that the suspect had unusual behaviors and that he had recently threatened a child by showing his sword.

The suspect received treatment in a hospital for 17 days for using drugs in the past and received psychological support for five years, however,...