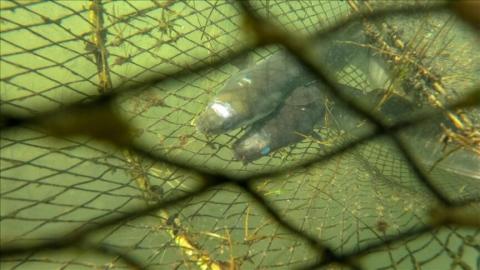 Eels travel from Mexico to Turkish waters for 7,000 kilometers to reproduce.

Coming to the world in Mexico's Sargasso Bay, eels reach Bafa Lake in the southwestern province of Muğla after traveling for three years. After spending some time in the lake, they start to travel back to where they originally came from.

The lake provides an ideal environment for many endangered bird species to reproduce and spend the winter.

Eels are among the mysterious species choosing lakes for reproduction.

Starting the journey as a larva, eels undergo transformation on their way. Their color turn glass color around Gibraltar and yellow when they reach the Mediterranean.Once they are wholly capable of swimming, they arrive in the Aegean Sea.

Eels, mostly choosing freshwater to live, reach Bafa Lake, where they can live long, after the Aegean Sea.
They have an interesting life span, arriving in lakes to grow and reproduce after a 7,000-kilometer-long journey that lasts three years, and returning back to the Sargasso Bay, where their life span ends.

Science, however, is yet to find out how eels found their route to Turkey, intuitive or some other way, while many scientists are conducting research on it.

Referring to their journey to Bafa Lake, he said the lake, fed by Menderes River, contains alluvium and so is opted by eels.

Also, muddy areas around lakes present an ideal living space to them, he noted.

Çoban, however, pointed out that global warming and drought may...