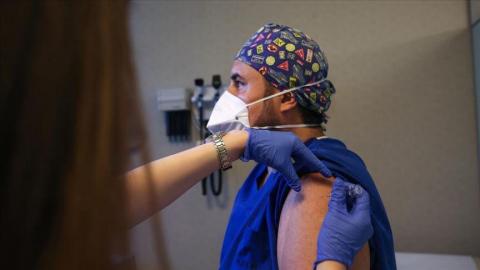 Around 8.6 million people in Turkey have skipped their second and third doses of the vaccines against COVID-19, the country's health minister has said.

"You need to get your shots on time if we are to benefit more from power of the vaccinations," Fahrettin Koca wrote on Twitter on Nov. 11, urging people to stick to the vaccination program.

Turkey this week started to give booster shots to its adult citizens.

Anyone older than 18 years of age who were administered an mRNA vaccine at least six months ago are now eligible for the third dose of the vaccine.

Koca earlier this week said that people can chose any vaccine as the booster shot.

Turkey, which started its inoculation program in mid-January, has been using both Pfizer/BioNTech's mRNA vaccine and the jab developed by the Chinese firm Sinovac.

The country was already giving the third doses for some time to the recipients of the Sinovac shot.
Turkey is also working to add a local jab candidate, Turkovac, to its arsenal of COVID-19 vaccines for which human trials are still ongoing.

Meanwhile, authorities said some 14 million people aged over 12 have not received their vaccines, and adding around 4 to 5 million refugees living in the country, the number of unvaccinated people is close to 20 million.
Officials reckoned that people are losing their interest in the vaccination program and increasingly becoming complacent with regards to basic anti-virus measures.

They noted that the number of the first dose of the jab administered declined 16 percent this week from the previous week, and fell 44 percent compared with September. Some 66,000 doses of the vaccine are given daily, which is the lowest number since the end of May.