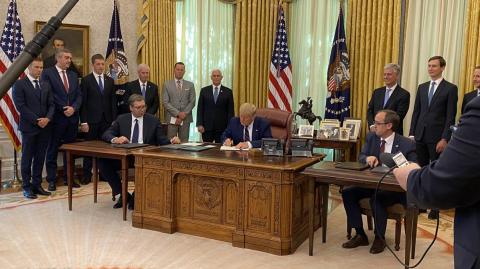 Former US President Donald Trump said in Thursday that the agreements between Kosovo and Serbia he brokered during his last year in the White House should be implemented, while his former Balkan envoy, Richard Grenell, called on Joe Biden's administration to become "more aggressive" in his leadership towards the region.

"The agreements my administration brokered are historic and should not be abandoned, many lives are at stake. The region is too important and the people have waited too long for this work to be cast aside," Trump said.

The statement comes as his former envoy to the Kosovo-Serbia dialogue, Richard Grenell, tours the region.

In the statement, Trump referred to Grenell as "my envoy" - a reference which drew criticism from the White House.

"Donald Trump is no longer President and doesn't have any 'envoy ambassadors' representing the United States," Bloomberg quoted a White House statement as saying.

After visiting Albania, Grenell visited Kosovo and now is in Serbia on a mission "to find economic opportunities" for the region.

On Thursday, he visited the Kosovo-Serbia crossing point of Merdare, where he highlighted the economic agreements that the US mediated and called for their implementation.

Trump appointed Grenell, then US ambassador to Germany, as his special envoy for the stalled Kosovo-Serbia dialogue in October 2019.

Instead of focusing like the EU on political relations, Grenell's main focus was on economic development....