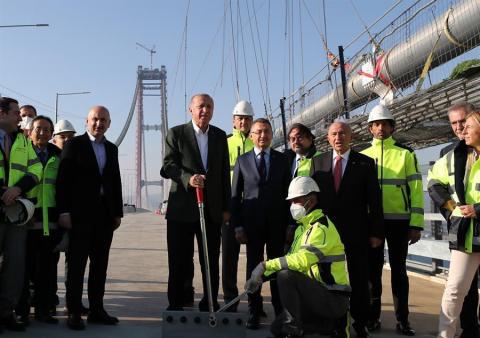 The 1915 Çanakkale Bridge will contribute to developing social ties among Europe, Asia, and Africa, while improving the trade and tourism sectors, Turkey's president said on Nov. 13.

Speaking at the Final Deck Installation Ceremony of the massive bridge, Recep Tayyip Erdoğan installed the final deck of the "global transportation project that connects Europe, Asia, and Africa to one another"

Apart from being the longest middle-span suspension bridge globally, the 1915 Çanakkale Bridge is "a really important work with its design, engineering, construction, and technical knowledge it brings to the country," he said.

Erdoğan said the bridge "which has already become one of the symbols of our country" was constructed by an enormous team of 670 engineers, over 5,000 workers, 740 construction vehicles, and 106 subcontractors.

"Carrying out the construction of such a project during a period of one of the most serious logistics crises of world history is highly critical and important," he added.

A new period in which all transportation activities, whether by land, sea, rail, or air, passes through Turkey is now starting, Erdoğan noted.

Set to link Europe and Asia once it is complete, the bridge's architecture is unique with its colors, figures, and completed towers ascending above the Paris landmark's 300 meters (984 feet) on either bank of the Dardanelles, a strait in the Çanakkale province between the Aegean Sea to the south and the Sea of Marmara to the north.

Shaped to symbolize an artillery shell as a tribute to the legendary World War I Battle of Gallipoli, the spires will tower 318-m (1,043-ft) high, with a mid-span of 2,023 m (6,637 ft), symbolizing the centennial anniversary of the Republic of Turkey's foundation.<...