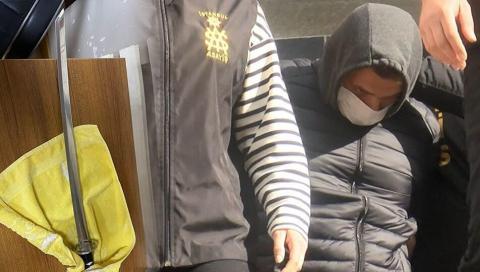 A man who killed a 28-year-old woman in Istanbul's Ataşehir district with a Samurai sword has confessed in his statement to the police that he targeted the woman on the street arbitrarily because he thought she was "defenseless."

"I left the house with the sword with the intention to kill someone. A man can resist with force, so I decided to kill a woman," the 27-year-old Can Göktuğ Boz told police officers after killing Başak Cengiz.

Surveillance footage of the femicide show Boz waiting at a corner as Cengiz walks on the street before suddenly attacking her.

"Then I went back home and cleaned the sword," Boz said.

According to media reports, Boz had been receiving psychological support in hospital for five years due to drug abuse, but had not seen any doctor over the last three years.

Police found notes, saying things such as "While trying to escape from bullets, run in zigzags" and "Nobody is dying on Istanbul's Anatolian side," on his walls.

The femicide has caused nationwide anger, with many women saying nowhere is safe for them. Femicide are perennial in Turkey, and women's rights groups say not enough action is being taken to stop this.

In October only, 18 women were murdered by men and 19 died under suspicious circumstances in Turkey, according to the We Will Stop Femicide Platform.

The perpetrator said he bought the Samurai sword online.

By law, swords are considered "antique arms" and can only be obtained with possession-only licenses. Police do not supply carrier licenses for these arms even if asked so.

A funeral was held for Cengiz in the capital Ankara on Nov. 12. Her mother, Beyhan Cengiz, who fainted at the funeral, demanded authorities to ban the sales of swords.