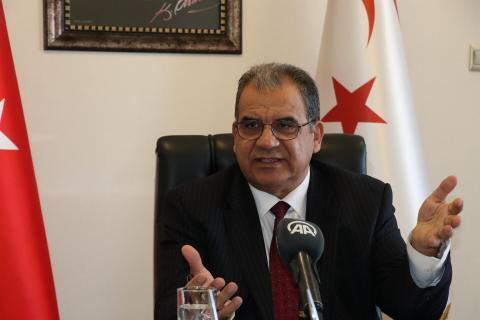 "We will have concrete plans and programs in that direction, which are being prepared," Sucuoğlu said of the new coalition government, which won the vote of confidence on Nov. 13.

Due to the coronavirus pandemic, higher education and tourism, which are the two leading sectors of the TRNC, were also affected, he said.

He said the Turkish Cypriots wasted their energy with the "federation deception" for more than 50 years, and no progress has been made in this regard.

"We are still faced with a mentality that sees the Turkish Cypriots as a minority ... we have no problems with good neighborliness with them [Greek Cypriots]. [Making efforts for] Two separate sovereign equal states is the right decision," he said.

On the Eastern Mediterranean issue, he said they are determined to protect their rights in the region. "Neither Turkey nor the TRNC will give up their rights on this issue. Our struggle will continue together."

Turkey, which has the longest continental coastline in the Eastern Mediterranean, rejects maritime boundary claims of Greece and the Greek Cypriot administration, stressing that the...