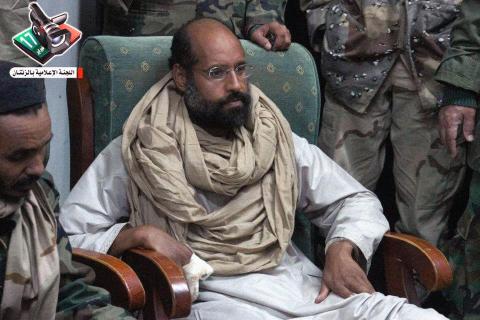 In a surprise announcement, Seif al-Islam, whose whereabouts have been kept secret for several months, became the first heavyweight candidate to sign up for the election race.

Libya's first ever direct presidential poll, with a first round on December 24, would mark the climax of a process launched last year by the United Nations to try to draw a line under years of violence in the oil-rich nation since the revolt that toppled Kadhafi in 2011.

Wanted by the International Criminal Court (ICC) for crimes against humanity allegedly committed during the NATO-backed uprising, Seif al-Islam completed "all the required legal conditions", the election commission said.

"Seif al-Islam Kadhafi submitted... his candidacy for the presidential election to the High National Electoral Commission office in the city of Sebha," it said in a statement.

The 49-year-old, sporting a salt-and-pepper beard, recited a verse from the Koran and thanked those assisting him, saying "God bless you", video footage showed.

The commission released pictures showing Seif al-Islam dressed in a traditional Bedouin robe and headdress. He was issued with a voter registration card for the southern Sebha district.

First reactions on the streets of the capital Tripoli were negative.

"Instead of resolving the problem this only complicates things further," said Nizar al-Hadi, 33. "It's just not right!"

Ramzi Douess said he did not doubt that some people would accept Seif's candidacy, but questioned what route he would lead the North African country on...