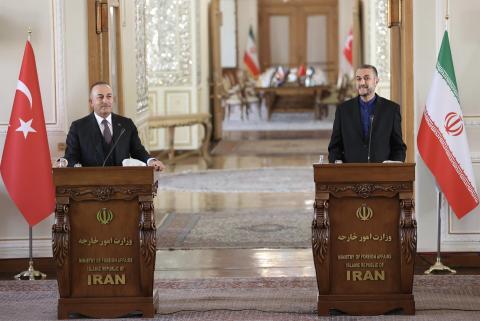 The unilateral sanctions against Iran are wrong, Foreign Minister Mevlüt Çavuşoğlu said on Nov. 15, emphasizing that it is important for the stability of the region.

"Unilateral sanctions against Iran should also be lifted. I would like to emphasize that we are very happy that the talks will start again in Vienna. The positive outcome of these talks will be important not only for our economic relations but also for the stability of the region," Çavuşoğlu said, speaking at a joint press conference with his Iranian counterpart, Hossein Amirabdollahian.

He pointed out that Turkey expressed on all platforms that unilateral sanctions against Iran were wrong.

He emphasized that the bilateral trade volume decreased during the pandemic, but the 71 percent increase seen in the first nine months compared to last year is pleasing. But he also stated that despite this, it is far behind the targets of the two countries.

He underlined the need to work harder to achieve the goals, saying, "We have been negotiating for six years, especially on expanding the scope of the preferential trade agreement. We want to complete this now so that our trade will increase even more."

Noting that there are important developments in the region of the two countries, Çavuşoğlu said that it was more important than ever to maintain dialogue and cooperation on regional issues.

Stating that Afghanistan is one of these issues, Çavuşoğlu said: "We need to continue working for a political solution in Syria....