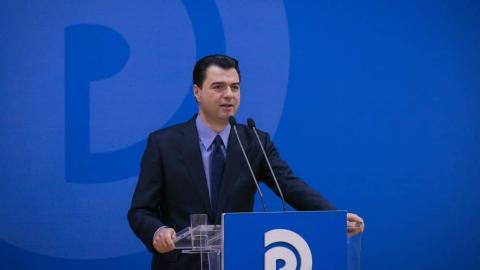 The meeting, which is reported to have been marred by arguments, concluded with a decisive vote for the official convention to be held on December 18.

"One party, one assembly on December 18, and it is certain that I will not allow anyone to hold the Democratic Party hostage," Democratic Party leader Lulzim Basha said after the meeting in a direct swipe at Berisha.

In May this year, Berisha was declared persona non grata in the United States by the State Department, which cited his alleged involvement in "significant corruption" and "misappropriation of public funds".

Under heavy US political pressure, Basha expelled Berisha from the party's parliamentary group in September. Since then, Berisha has been involved in several town hall meetings with party members all over the country, alongside other dissatisfied party figures.

On Wednesday, Berisha he informed journalists he had collected "more than enough delegates' signatures" to call a party convention which he wants to be held on December 11.

Experts told BIRN that the crisis within the party is deepening.

"The decision to have two assemblies is an escalation of the 'civil war' within the DP," Lutfi Dervishi, an experienced political journalist, told BIRN.

"What could happen is a split of the DP in a process that does not begin and does not end on December 11 and 18," Dervishi predicted.

Berisha is asking party delegates to oust Basha and retake control over the...