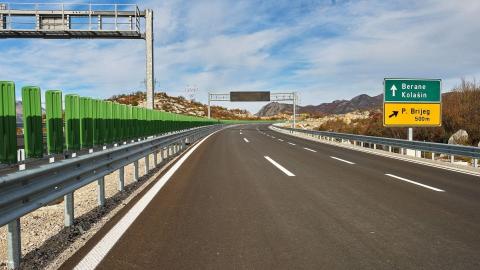 The first stretch of the Bar-Boljare highway in Montenegro. Photo: Government of Montenegro

According to a feasibility study by URS Infrastructure and Environment, a British engineering consultancy, the first phase of the highway should cost $803 million euros, while a study by another British consultancy, Scott Wilson Group, said it should cost $570 million.

The feasibility studies were carried out in 2009 and 2012, but the previous government, which launched the highway project, classified them as confidential.

"There was a lot of room for corruption, as the previous government was persistent in hiding information about the financing of the highway," Dejan Milovac from the prominent local watchdog NGO MANS told Vijesti TV.

"More than six years have passed [since the project started], but we still don't know precisely how much it all cost Montenegrin citizens," Milovac added.

The China Road and Bridge Corporation, CRBC, is building the Montenegrin leg and 85 per cent of the first section is being covered by a $944 million loan from China's Exim Bank.

Minister for Capital Investments Mladen Bojanic has said that so far the government has paid 724 million euros to investors for the basic part of the works and another 38 million euros for the additional works.

On November 12, Bojanic said that the first phase will be finished by the end of November.

According to state data from December 2020, Montenegro's public debt was then equal to 90.85 per cent of GDP - a very high figure - while the cost of the 41-kilometre first phase of the highway alone was estimated to be...