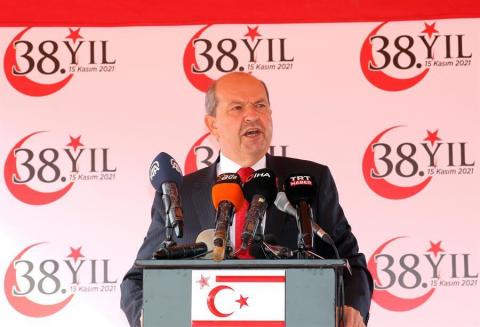 "The proclamation of the TRNC on Nov. 15, 1983 is a result of the Greek Cypriot side's refusal to accept our sovereign equality, its refusal to share power and wealth with us, and the international community's hearing only the Greek side's voice," Ersin Tatar said at a ceremony marking the 38th anniversary of the founding of the TRNC.

Tatar reminded that Turkey stopped the Greek junta, which declared the Hellenic State of Cyprus with a military coup on July 15, 1974, by using its effective and de facto guarantor right.

"If a peace operation had not been carried out in Cyprus [Island] on the morning of July 20 for our security of life, property and independence, Cyprus would have turned into a Greek island today," he said.

Reiterating that the "federation" model, which has been the basis of negotiations for over 50 years, has been exhausted, he said: "It has also been recorded as our official position that we will not enter into a negotiation process until our sovereign equality and equal international status are accepted."

"A just and sustainable solution in Cyprus can only be achieved based on the existing two states and the equal international status and sovereign equality of the two sides," he said, adding they prefer finding solutions to the problems instead of stepping into new problems and an uncertain future on the island.

On the partial reopening of Maraş, or Varosha in Greek, Tatar said it has brought a new dimension to the Cyprus issue.