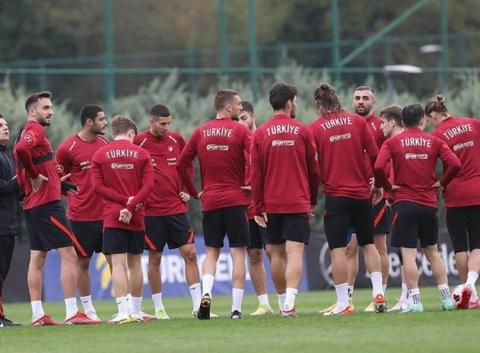 Turkey heads to Montenegro on Nov. 16 night knowing that a victory would be enough for it to secure a top-two finish in its 2022 World Cup qualification group.

The country is currently second in Group G, level on points with third-placed Norway, while Montenegro is down in fourth and will finish in that position regardless of what happens on the final matchday.

Turkey will kick off the match on the back of a thumping 6-0 win over Gibraltar on Nov. 13, with the host proving to be far too strong for its opponent in Istanbul.

The success moved Turkey above Norway, which was held to a goalless draw by Latvia on Nov. 13, into second position in the group, and a win over Montenegro will be enough to secure either the top or the second spot in the group.

Kerem Aktürkoğlu opened the scoring in the 11th minute against Gibraltar, and Halil Dervişoğlu scored twice inside four minutes to make it 3-0 at halftime.

Merih Demiral, Serdar Dursun and Mert Müldür completed the scoring after the break.

With the Netherlands, following a 2-2 draw at Montenegro on Nov. 13, sitting atop with a two-point lead over its opponents, an automatic spot at next year's World Cup is still open for Stefan Kuntz's side, but it will need Holland to drop points against Norway in what is a huge game in Rotterdam.

The match will be played behind closed doors amid a new partial coronavirus lockdown in the Netherlands.

Even a loss could keep Turkey in the second spot if Norway loses in Rotterdam.

The last time Turkey and Montenegro played was on Sept. 1, when the home side went ahead thanks to goals by Cengiz Ünder and Yusuf Yazıcı, but conceded twice to be held to a 2-2 draw.

The second-place team goes into a 12-team playoff that...