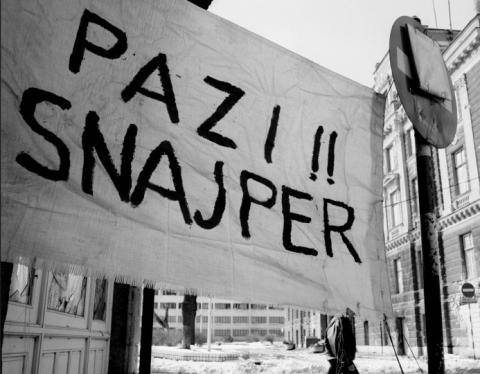 The exhibition is based on research carried out by Paul Lowe, an award-winning Sarajevo-based photographer who reported the Bosnian war and whose work has been published by Time, Newsweek, Life and The Sunday Times Magazine, among others.

The exhibition historically and geographically reconstructs the area in Sarajevo known during the 1992-95 siege as Sniper Alley - the informal name for Zmaja od Bosne Street and Mesa Selimovic Boulevard, the main boulevard in Sarajevo, which during the Bosnian war was lined with snipers' posts, making it dangerous for civilians to traverse.

The mountains surrounding the city were also used for sniper positions by the Bosnian Serb Army.

"Paul Lowe photographed the Yugoslav wars from the beginning, he was here in Sarajevo during the siege and saw first-hand what was happening, not just in Sniper Alley, but in Bosnia and Herzegovina in general. He stayed on afterwards and saw the consequences of the war too," said BIRN's regional director, Marija Ristic.

The exhibition will not only feature Lowe's work, but also images by other photographers such as Ron Haviv, Enric Marti, Rikard Larma and Gervasio Sanchez.

"Lowe has used his photography and pictures by others, but also documents, artistic installations and technology to create a compelling narrative of events. Through this combination of journalism, court findings, witness testimonies, 3D modelling and art we hope to...