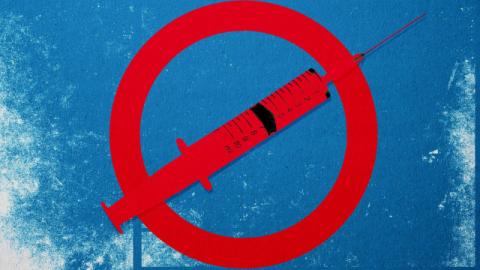 Conspiracy theories, security concerns, threat downplaying or simply rebellion - whatever the reasons for refusing to be vaccinated against COVID-19, they seem to have found fertile ground in the Balkans to take root. If you also believe that vaccines are an attempt to change human DNA, that they are used for microchipping, that they cause sterility, diseases, that they are more dangerous than the virus, or that they are simply useless, then you probably belong to a large part of the population. Balkan countries, flatly refusing to be vaccinated.

After the appearance of the first case of infection on February 26, 2020, along with the new coronavirus in the country, a parallel pandemic of fake news and conspiracy theories broke out. The rhetoric "mutates" from simple denial of the virus to anti-vaccine suggestions, with the "vaccine causing infertility."

Already in the first months, rumors were circulating that hospitals were offering money to record in someone's death certificate that the person had died of covid. The protective mask was described as a "muzzle" that the government wants to put on its citizens. All sorts of claims about the harm of masks, miraculous treatments of COVID-19, theories that 5G technologies are to blame for the spread of the virus, etc. have flooded social networks for months.

A study of attitudes toward COVID-19 found that older people and university graduates...