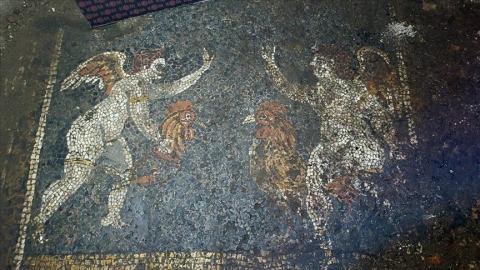 A 2,700-year-old mosaic believed to belong to a wealthy Roman was unearthed in a house-shaped compartment 10 meters below the ground in Turkey's west.

Turkish police learned that illegal excavations were carried out in the garden of a residence close to the historical Kemeraltı Bazaar and Agora Ruins in İzmir province where narrow streets do not allow vehicles to enter the neighborhood.

After a monthlong follow-up, the police detained three suspects who were trying to excavate the historical remains by digging a tunnel.

Following the detentions, experts from the İzmir Archeology Museum conducted research in the area and found a mosaic and two fluted columns with a length of two meters belonging to the early Roman period covering the years 753-509 BC.

The mosaic, depicting two human figures with roosters, is believed to belong to a wealthy Roman and is usually found in the halls of houses, symbolizing magnificence and wealth.

The suspects reportedly told the police that when they were drilling in the garden of the house to extract water, they noticed that the construction machine did not move beyond a certain level, and when they dug the well with a shovel, they found the mosaic and columns.

The area has been taken under protection following the discovery of the mosaic, which is said to be rare in the world.