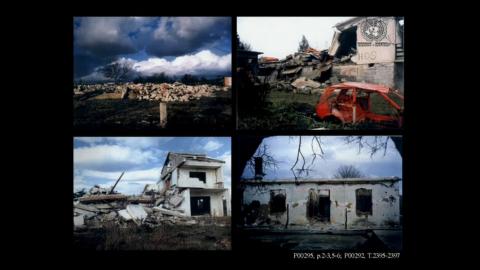 Ivica Bilaver was a 13-year-old schoolboy in the autumn of 1991, when his home village of Skabrnja, near the Croatian city of Zadar, became the focus of fighting between Croatian forces and the Yugoslav People's Army and other Serbian fighters.

In the early morning of November 18, 1991, he and his family took refuge in a cellar, along with some neighbours, as the village came under artillery fire. At around 9 or 10am, two soldiers entered the cellar and took away weapons from one of the men hiding there.

Some ten minutes later, "five or six other soldiers came and took all of us out of the cellar… They lined us up, the four adults were together and the three of us kids were next to them," Bilaver told investigators from the UN war crimes tribunal in The Hague in September 2000.

"We were lined up against the wall of the house and the four adults were shot and killed by the soldiers," he said. "I remember those that died all fell down and the rest of us were still standing."

One of bullets ricocheted off the wall and hit Bilaver in the left leg. He was hospitalised in the nearby town of Benkovac, and later freed as part of a prisoner exchange.

The four people whose execution was witnessed by the 13-year-old Bilaver were Krsto Segaric, Luca Segaric, Stana Vickovic and Joso Miljanic. They were among at least 48 people who were killed when the Yugoslav People's Army, together with local Serb forces and paramilitary units from Serbia, attacked the villages of Skabrnja and nearby Nadin and seized control over them them on November 18, 1991.

The crimes were investigated by the Hague Tribunal, and Milan Martic and Milan Babic, both former presidents of the Republic of Serbian Krajina, an unrecognised Serb rebel statelet in Croatia,...