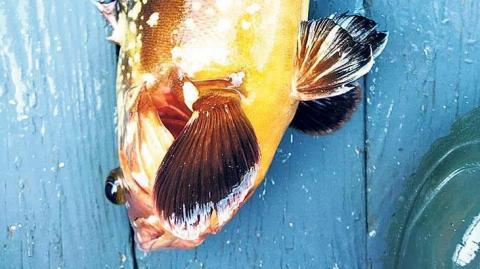 In a surprising event, grouper, an endangered marine species rarely observed in its prime habitat areas such as the Mediterranean Sea, has been spotted off Turkey's Black Sea coast for the very first time.

Reşat Fındık, a local fisherman who left his nets to catch bluefish off the northwestern town of Amasra, caught grouper fish instead. It is an indication that as the waters of the Black Sea have been warming up due to global climate change, it has now started to host marine species that survive in warm waters.

Speaking to daily Milliyet after examining the fish, Deniz Yağlıoğlu from Düzce University said that although it seems pleasing that groupers have created new habitats, it shows that the Black Sea is "gradually becoming the Mediterranean."

"We are watching the Black Sea succumb to global climate change," Yağlıoğlu said, noting that it was very significant for the species, which is considered globally endangered, to be seen in the Black Sea with the effect of global warming.

"The Black Sea has been at war for years with this process called Mediterraneanization. We need to take these pleas of the Black Sea seriously and protect its future," the academic added.

Studying the impact of climate change on marine biodiversity, academic Cemal Turan also pointed out the negative effects of this development.

"Some of the species living in the Mediterranean Sea consider the Black Sea as favorable habitat for them. But we could lose many species in the Black Sea because they have nowhere to escape to the colder waters higher up," Turan noted.

Turan underlined that the increase in the number of invasive fish in the partly-landlock sea may cause the extinction of many species native to the Black sea as a result of the...