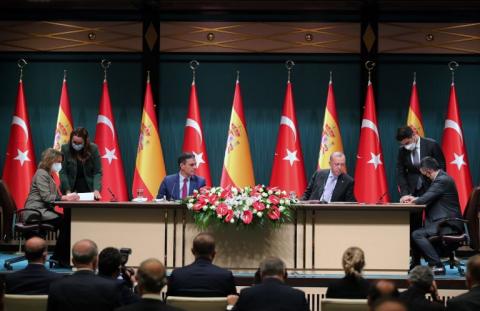 Greece has expressed its intense consternation over the stance of Spanish Prime Minister Pedro Sanchez in seeking an upgrade of Turkey-Spain cooperation, particularly in the area of defence, at a time when the EU and the international community have condemned Ankara's provocations against EU member-states Greece and Cyprus and violations of international law in the Eastern Mediterranean.

Commenting on Sanchez's talks with Erdogan in Ankara and an agreement for Turkey to purchase a large aircraft carrier from Spain, government spokesman Yannis Economou at today's press briefing made clear the intense annoyance of the Greek government.

He underlined that the Spanish government is acting outside of the framework of EU decisions on the Union's relations with Turkey.

"We were apprised of the remarks [of Sanchez and Erdogan] and we shall be monitoring developments…It is self-evident that [EU] member-states are bound by the decisions of the European Council as regards Turkey's delinquent behaviour and violations of international law," Economou said.

"The socialist prime minister of Spain was obliged to take into consideration the decisions of the EU," Economou said, noting that the leader of Spain's main opposition party has expressed his disagreement with a further tightening of Spain's relations with Ankara.

At his joint press conference with Sanchez in Ankara, Erdogan stressed that with the procurement of a second, larger aircraft carrier, and possibly a submarine from Spain, the two countries' defence cooperation will be strengthened

"The first aircraft carrier was not a large-scale one. We have agreed on the...