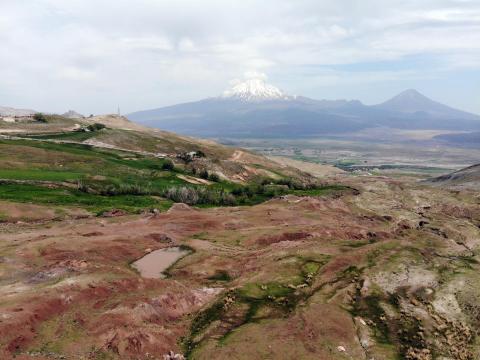 History Channel, a world-famous television network of the United States, is shooting a documentary about the area believed to be home to the remains of Noah's Ark in Doğubayazıt district of the eastern province of Ağrı.

While working on aerial photographs to create regional maps at the General Command of Mapping in 1959, survey engineer Captain İlhan Durupınar discovered the area near the Telçeker village of Mount Ararat, where the alleged remains of Noah's Ark came to light.

The region, which hosts thousands of local and foreign tourists every year, also attracts the attention of foreign researchers and documentarians.

The Turkish Film Commission has initiated a study on Noah's Ark, which has been a mystery for centuries, to draw the attention of the film industry to the region.

The American television channel is now working on the area, which has been the subject of documentary channels in Turkey.

Speaking to the state-run Anadolu Agency, Turkish Film Commission President Sait Yardımcı said that Turkey has many values and that their goal is to contribute to the country's tourism with a documentary.

Stating that Ağrı's recognition with Noah's Ark increased a lot, Yardımcı said: "When this project is finished, it will play a significant role in the promotion of Ağrı. We both protect the cultural heritage and contribute to the country's tourism."

Stating that foreign scientists are also doing much research in the region,...