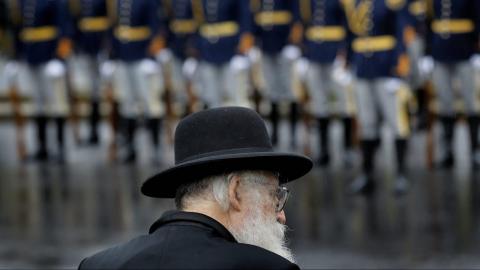 The law was introduced into parliament's Chamber of Deputies on October 18 by representatives of all the parliamentary parties except the extreme right Alliance for the Union of Romanians, AUR, and adopted one month later.

During the debates, the law's initiator, deputy Silviu Vexler, said the past must be a foundation for the future, and "education is essential for the construction of a democratic society.

"The same project, beyond the strictly technical-educational component, honours the memory of Constantin Caragea, a Romanian diplomat who during the Holocaust managed to save over 30,000 Jews," Vexler said.

Romania has recognized the crimes committed by the far-right regime of Ion Antonescu during World War II, when Romania was an ally to Nazi Germany.

The final report of an international Commission for the Study of the Holocaust in Romania by the Ellie Wiesel Institute, published in 2004, showed that between 1940 and 1944 the Antonescu regime was responsible for the death of between 280,000 and 380,000 Jews and 11,000 Roma.

"Romania is taking a significant step in this direction, taking responsibility for its past and civic education on the Holocaust and promoting memory. Institutions continue to make progress," he said.

However AUR senator Claudiu Tarziu questioned the need for such a law given what he called the low level of anti-Semitism.

"There has been no serious case of anti-Semitism in...