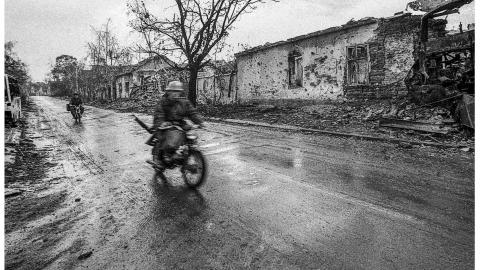 Milos Cvetkovic's photographs of the siege and capture of Vukovar go on display at the EndzioHub gallery in central Belgrade on Thursday evening, 30 years after the eastern Croatian town fell to the Yugoslav People's Army and Serbian paramilitaries.

Cvetkovic was a photojournalist for Serbian newspaper Borba in 1991 and reported from eastern Croatia and the Vukovar area during the siege.

A book containing his photographs is also being published by ForumZFD, a German peace-building organisation.

"The fierce fighting lasted for less than three months, and finally, when we 'liberated' [Vukovar], we 'liberated' it to the ground. The 'liberators' came in, and I went with them," Cvetkovic writes in the book.

He describes reporting from Vukovar as a "great professional challenge".

"For a photojournalist on a war assignment, every day is the same," he recalls in the book. "Breakfast in the morning, then from the hotel to the car and towards Eastern Slavonia. A military checkpoint on the bridge over the Danube near Bogojevo, then to Erdut, Borovo Selo, Trpinjska Cesta, and so on for days, always the same - returning to base, developing films and pictures, sending a photo to the editorial office…"

After Vukovar fell, its non-Serb population was expelled from the area, some prisoners of war and civilians were deported to jails and detention camps in Serbia, and more than 200 people were executed at the nearby Ovcara Farm and in other places.

Two senior Yugoslav People's Army officers, Mile Mrksic and Veselin Sljivancanin, were convicted by the Hague Tribunal of bearing responsibility for the killings of prisoners at Ovcara Farm.

The exhibition is on display until November 23.