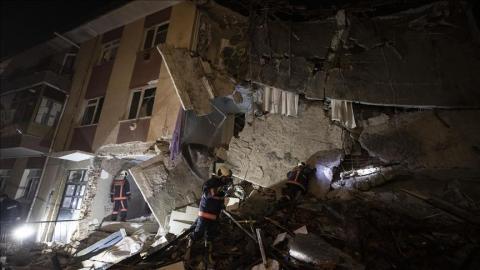 An explosion early on Nov. 19 in an apartment building in Turkey's capital has left two people dead and four others wounded, an official said.

Speaking to reporters at the site in Keçiören district, Ankara Governor Vasip Şahin said a child and her father were killed in the blast, which caused part of the building to collapse.

"Our hope is that no one is under the rubble, but investigations are continuing by evaluating all possibilities. Unfortunately, we received information that the father and young child of an Iraqi Turkmen family had died," said Şahin.

Şahin said two Turkish citizens, an Iraqi Turkmen family and an Afghan family were living in the building and the Afghan family was not home when the blast occurred.

"There is both a natural gas system and LPG [liquefied petroleum gas] in the building. Which one is the cause of the explosion will only be determined after the technical review," he added.

"In the explosion that took place in Keçiören, a 2-year-old girl and her 35-year-old father died. The 5-year-old boy is in serious condition. Treatment of the pregnant mother continues."

The police made a detailed examination at the scene and the rubble will be cleared later this morning.

It was learned that Muhammed Kahtan, who lost his life, came to Turkey five years ago and worked as a car mechanic.