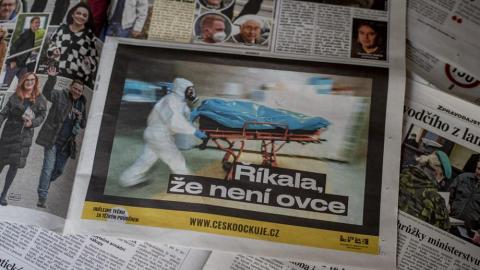 However, Babis's administration is on its way out of power, so his reluctance to act as the fourth wave of the pandemic approached has caused some head-scratching. Some quarters suspect the outgoing premier might have been waiting just to complicate things for the incoming government.

And things are getting tough as the health system begins to creak once more. Hospitals are now hosting over 4,000 COVID-19 patients, 661 in intensive care. Non-urgent care has been limited in up to 30 per cent of the country's hospitals. Health Minister Adam Vojtech warned that the health system is at severe risk of being overwhelmed.

Despite - or perhaps because of - the government's pleas for people to sign up for a jab, the Czech vaccination rate remains disappointingly low. With just 58 per cent of the population fully vaccinated, the country is significantly below the EU average of 65 per cent, albeit it leads in the V4 alongside Hungary. Vojtech told the media that the new hardline measures to raise the vaccination rate are the only route to a "relatively calm Christmas".

Under the new regime, negative tests will no longer be recognised as valid for entrance to events and service establishments, Babis announced on television. Those with a vaccination certificate or who have recovered from COVID-19 will be admitted.

The Slovak prime minister on Thursday announced similar new measures as COVID-19 wreaked havoc across the country over the past week, filling up hospitals to the point of collapse and forcing doctors to make life-and-death decisions as the number of patients surpassed the available ventilator capacity.

With doctors having to handpick the patients who got the beds with the life-saving equipment - leaving others to struggle without it...