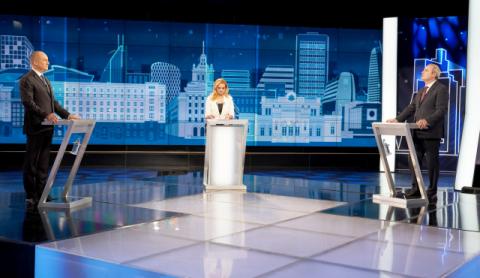 In the studio of "The Day Begins", sociologist Boryana Dimitrova described the debate as very important, especially for people who want to vote informe, to see the position of the main candidates. She also commented that the differences were clear. According to Parvan Simeonov, the clash between the two presidential candidates passed almost without mistakes on their part.

The Presidential Debate Radev vs Gerdjikov: Highlights and Messages

Boryana Dimitrova said it would be good if there were three debates on the main topics.

"The positions were presented to the public, but many of them could be further developed. The more we do not debate, the more people lose the desire to go into detail, but to vote on the basis of clichés. It is important when we talk about low turnout and lack of civic interest, we must know that they wake up with such forms," said Dimitrova.

She said that each of the candidates stayed in the territory where they felt most secure, where they showed they lines in which they will go and which will not be crossed.

"We also saw things on which there are very clear distinctions. We also saw opposition from the declared wishes of Rumen Radev and what he presents as a vision," Dimitrova added and gave two examples:

"Radev said that the draft Constitution is based on civil rights. However, a very important civil law is the right of people to be informed, among other things. In this sense, I do not think it is good that this draft constitution is not made public when it exists for over a year now.

Anastas Gerdjikov presents more actively the theses that are related to future management, assessment of the current one. It is unlikely that the president will...