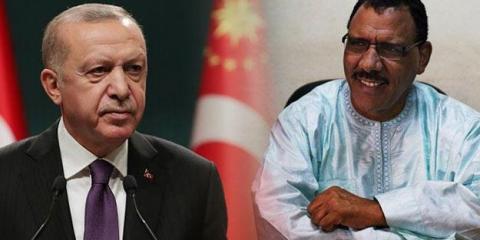 In a phone call, Turkish President Recep Tayyip Erdoğan on Nov. 18 discussed regional developments with Mohamed Bazoum, his counterpart from the West African country of Niger.

During the call, Erdoğan said that he places great importance on relations with Niger, Turkey's Communications Directorate said in a statement.

Erdoğan also said that Niger will continue its close cooperation in the fight against FETÖ, the group behind the defeated 2016 coup attempt in Turkey, in which 251 people were killed and 2,734 injured.

FETÖ also has a large presence outside Turkey, including schools it runs as a source of revenue.

Expressing condolences for the people who lost their lives in armed attacks in Niger on Tuesday, Erdoğan said Turkey supports Niger's counter-terrorism efforts.

Gunmen identified as terrorists on Tuesday killed at least 25 people in southwest Niger, near the border with Mali, the latest in a string of deadly attacks.

"20 euros for pensioners tomorrow, for other citizens - on Wednesday and Thursday"