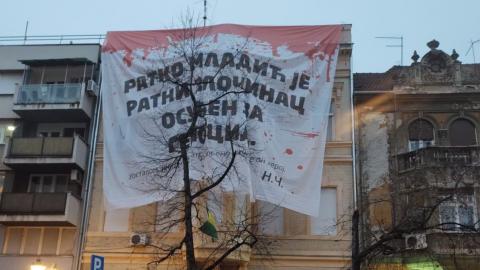 Unknown perpetrators on Thursday removed a banner with the slogan "Ratko Mladic is a war criminal convicted of genocide" from the building in the Serbian city of Novi Sad which houses the offices of the League of Social Democrats of Vojvodina, LSV political party.

LSV spokesperson Aleksandar Marton said that early in the morning, a group of male right-wing extremists gathered at the building and threw eggs at the banner.

"During the day, around 1pm, they climbed up on the next building and from a terrace, from an area where the banner could be removed, they managed to pull it off and throw it on the ground," Marton told BIRN.

The large banner had been hung on the LSV building amid continuing tensions over murals glorifying Ratko Mladic in the capital Belgrade and other Serbian cities.

Marton explained that the LSV put up the banner "because of all of the things that have been happening in Serbia in the last few weeks and the last few years".

Mladic was sentenced to life imprisonment by the UN tribunal in The Hague for genocide and other wartime crimes. But Serbian and Bosnian Serb officials do not accept that the 1995 massacres of Bosniaks from Srebrenica by Bosnian Serb forces constituted genocide.

"We see what is happening in Belgrade, that people who want Serbia to respect those verdicts, to call things by their real names, those people are attacked and are targeted, so our banner was a strong message," Martin...

Vucic: I expect US to encourage Pristina to meet commitments

Djokovic-Nadal clash at Aussie Open not possible before final

Dacic: We will not change our positions on Kosovo, Russia sanctions

Is it already in Serbia?