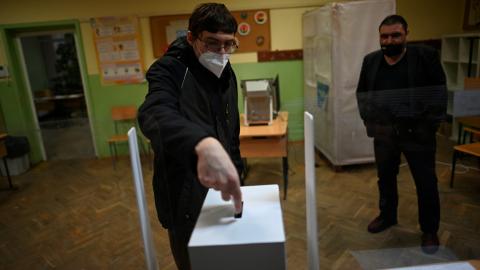 A man votes in a polling station during the general election in Sofia, Bulgaria, 14 November 2021. Photo: EPA-EFE/VASSIL DONEV

Bulgarian Ambassador Angel Tcholakov was informed that Turkey rejects all allegations that Bulgarian voters of Turkish ethnicity were essentially directed by the Turkish authorities to vote for an ethnic Turkish party in Bulgaria on November 14.

Bulgaria is home to a significant ethnic Turkish community dating back to Ottoman times. Many now live in Turkey itself. An estimated 350,000 ethnic Turks with Bulgarian citizenship live in Turkey. Most moved there under pressure from the assimilationist policies of Todor Zhivkov's communist regime in Bulgaria in the late-1980s.

Turkish government and opposition parties as well as the Movement for Rights and Freedoms, Bulgaria's main ethnic Turkish party, called on all Bulgarian citizens living in Turkey to vote in the elections.

The Bulgarian daily Novinite reported Bulgaria's Interior Minister Boyko Rashkov as saying that the Turkish media had called for their mass participation in the elections. Rashkov noted that 1,500 people had voted in just one section of the Turkish city of Izmir, which he called objectively impossible.

According to the results, the Movement for Rights and Freedoms received more than 80,000 votes cast at 126 polling stations in Turkish...