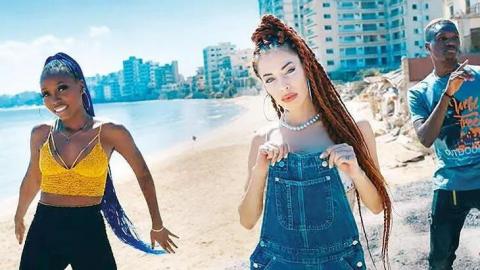 The shooting of the controversial clip was completed in the summer months, and it was published on Elibol's YouTube account on Nov. 16 after final technical adjustments were made.

She further promoted the video to her 27,000 Twitter followers.

In the three-and-a-half-minute music video, a group of young people is seen dancing and singing on the golden beaches of the town and on the streets between the abandoned buildings.
Dilapidated homes, hotels and shattered storefronts are also seen as the group cycles along the refurbished roads.

Released the day after the 38th anniversary of the founding of Turkish Cyprus, the clip triggered anger among many Greek Cypriots and Greeks, with the pop artist receiving messages filled with insults and hate.
The reactions came after the song became a headline in Cyprus Mail, one of the leading Greek Cypriot news platforms.

Some Greek-speaking users on social media criticized the clip, saying it was in poor taste and that it shows a lack of respect for the sensitive nature of the town, which has become emblematic of the island's division.

"Let the buildings fall on you, Cyprus is Greek," were among the messages Elibol received in two days.

Known as "Varosha" in Greek and "Maraş" in Turkish, the ghost town was once the island's top tourism destination but has been fenced off and...