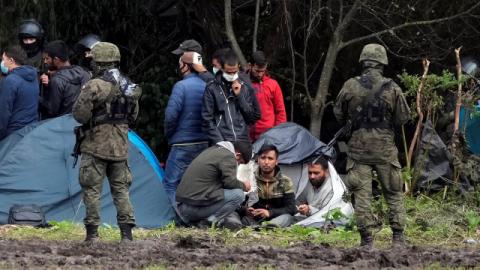 Thousands of migrants, mostly from the Middle East, have flocked to Europe after Belarusian President Alexander Lukashenko announced in May that he was easing measures against those wishing to emigrate to the West.

Migrants told the New York Times that "Belarusians took them to the border and gave them pliers for cutting wire." Most of these migrants come from Iraqi Kurdistan and say they are fleeing the impasse.

The role of Belarus

According to the European Union, Minsk has attracted migrants and used them as a means to avenge sanctions imposed by Brussels for repression against the opposition. Belarus denies and accuses European authorities of failing to provide a humanitarian corridor.

Recently, Belarusian President Alexander Lukashenko noted that "if the Poles do not provide a humanitarian corridor, if they prevent this, Belavia can take them to Munich."

For now, however, Polish border guards are pushing migrants to the other side of the border with Belarus, and authorities in Warsaw describe what is happening as a hybrid attack from the neighboring country.

What do migrants flee from?

About 3,000 Kurds have left Iraqi Kurdistan in recent months. About 1,600 of them went to Belarus on tourist visas.

Iraqi Kurdistan is a region generally considered relatively stable and rich in oil. However, the danger of terrorist attacks by Islamic State is constant - the group continues to operate in the disputed territories. In addition, Turkey is conducting regular military operations in the northern part of the region. There is also an internal threat - a clash between local forces and Iran-backed Iraqi Shiite militias.