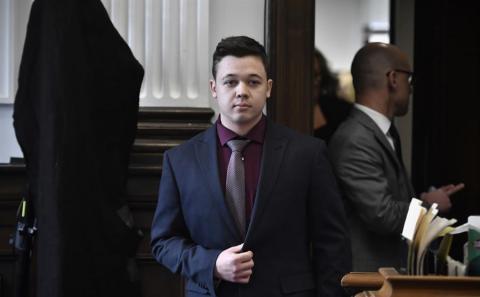 Kyle Rittenhouse was acquitted of all charges on Nov. 19 after pleading self-defense in the deadly Kenosha shootings that became a flashpoint in the debate over guns, vigilantism and racial injustice in the U.S.

Rittenhouse, 18, began to choke up, fell forward toward the defense table and then hugged one of his attorneys as he heard a court clerk recite "not guilty" five times.

He was charged with homicide, attempted homicide and reckless endangering for killing two men and wounding a third with an AR-style semi-automatic rifle in the summer of 2020 during a tumultuous night of protests over the shooting of a Black man, Jacob Blake, by a white Kenosha police officer.

Rittenhouse, a former police youth cadet, said he went to Kenosha to protect property from rioters. He is white, as were those he shot.

The anonymous jury, which appeared to be overwhelmingly white, deliberated for close to 3 1/2 days.
Rittenhouse could have gotten life in prison if found guilty on the most serious charge, first-degree intentional homicide, or what some other states call first-degree murder. Two other charges each carried over 60 years behind bars.

A sheriff's deputy immediately whisked him out a back door through the judge's chambers.
As he dismissed the jurors who sat in judgment in the politically combustible case, Circuit Judge Bruce Schroeder assured them the court would take "every measure" to keep them safe.
In reaction to the verdict, prosecutor Thomas Binger said the jury had spoken.

Rittenhouse's mother, sitting several feet away from him on a courtroom bench, gasped in delight, began crying and hugged others around her.
Family spokesman David Hancock said outside the courthouse that Rittenhouse plans to study...