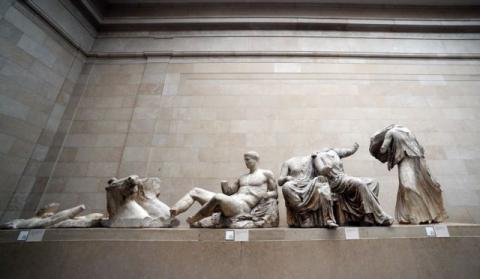 An article by Greek Prime Minister Kyriakos Mitsotakis is hosted by the British newspaper "The Mail on Sunday", in which he calls on his British counterpart to seize the opportunity at this time, and the current generation to be the one to finally reunite the Parthenon Sculptures.

Here is the full text of the Prime Minister's article:

"Only a handful of Britain's past Prime Ministers have studied classics at university. Fewer still would ever have shouted about the influence of Ancient Greece on their political thinking. None, I suspect, cited an Athenian statesman from the 5th Century BC as one of their heroes.

And then came Boris Johnson. Ever the contrarian, Britain's Prime Minister has done all three.

Classics at Oxford. An intuitive understanding of what classical civilisation has given to the modern world. A man who even owns a bust of Pericles, the hero in question.

More than most, Boris Johnson understands the unique bond that ties modernity to ancient history.

Which is why, when I met with him last week in Downing Street, he told me that he understood the strength of feeling among the Greek people when it comes to one of the few dividing lines between Greece and the UK: the future of the Parthenon Sculptures.

These marbles were fashioned by the classical Greek sculptor Phidias and take the form of a frieze that wrapped around the great temple. Most of that frieze is intact and remains in Athens. The part illegally removed by Lord Elgin, however, is locked away in the British Museum, 1,500 miles from its true home and dislocated from both the city and the world monument to which it rightfully belongs.

Spend a few minutes strolling through the beautiful glass-fronted third-floor gallery at the Acropolis museum...