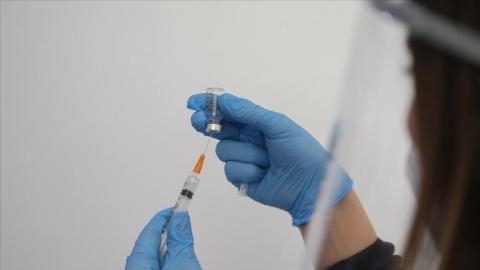 More than 50 million people, or 60 percent of the population, have been fully vaccinated, while this rate was around nearly 81 percent for the citizens aged 18 and above, according to the country's health minister.

"The number of people who have received two doses of vaccine exceeded 50 million today [Nov. 20]. Two-dose vaccines currently account for 60 percent of the total population," Fahrettin Koca said, adding that those who are still undecided about the vaccine should take the decision of 50 million as an example.

"Since we take the age of 18 and over as a basis in the vaccination program, this rate appears to be 80.5 percent in the table. We need to increase this rate for a stronger fight against the pandemic," he noted.

Tunceli, Osmaniye, Çanakkale, Kırklareli, Balikesir, Bilecik, Hatay, Tekirdağ, Adana and Bartın are among the 10 provinces where the density of COVID-19 cases increased the most between Nov. 6 and Nov. 12 compared to the previous week, according to Koca.

Meanwhile, the southeastern province of Şanlıurfa still ranks top as the province has the lowest fully vaccinated adult population rate at 55.8 percent despite all the calls made by the authorities.

The eastern province of Batman follows Şanlıurfa with 59.1 and the neighboring province of Diyarbakır with 59.3.

The first three provinces with the highest vaccination rate are the Black Sea province of Ordu with 94.3, the Mediterranean province of Muğla with 83.5, and the northwestern province of Kırklareli with 83.3.

Turkey's third-largest province of İzmir is leading among provinces with a high population at an 81.4 percent inoculation rate.

The capital Ankara and Istanbul lag behind İzmir, and both have a rate above 73 percent.