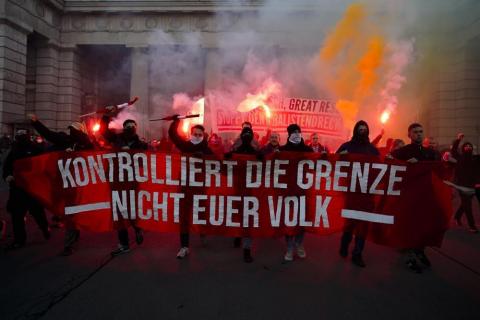 Tens of thousands took to the streets in cities across Europe and Australia on Nov. 20 as anger mounted over fresh COVID restrictions imposed against a resurgent pandemic.

And Dutch police faced a second night of rioting - this time in The Hague - after the previous night's violence in the port city of Rotterdam.

Clashes erupted after a day of mainly peaceful protests elsewhere in the Netherlands, with rioters throwing stones and fireworks at police and setting fire to bicycles. Several people were arrested.

Europe is battling a fresh wave of infections and several countries have tightened curbs, with Austria on Nov. 19 announcing a nationwide partial lockdown - the most dramatic restrictions in Western Europe for months.

The Netherlands went back into partial lockdown last Saturday with at least three weeks of curbs, and is now planning to ban unvaccinated people from entering some venues, the so-called 2G option.

Several thousand protesters were angry at the latest measures gathered in Amsterdam. Another thousand marched through the southern city of Breda near the Belgian border, carrying banners with slogans such as "No Lockdown".

But "we're not rioters. We come in peace," he said, distancing himself from the chaos the previous night in Rotterdam, in which police said they had fired both warning and targeted shots and used water cannon.

In Austria, around 40,000 came out to protest in central Vienna near the Chancellery, responding to a call from the far-right FPO party.

They held up banners decrying ...