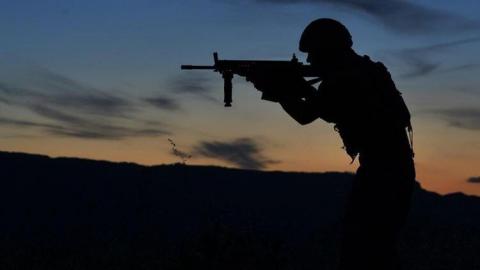 The Turkish military has "neutralized" 831 terrorists in cross-border operations in northern Iraq since April, said the defense authorities on Nov. 20.

According to the Defense Ministry, Turkish soldiers have seized nearly 1,300 weapons and 316,000 ammunitions belonging to the terrorists since Operations Pençe-Şimşek and Pençe-Yıldırım were launched in April.

Over 1,400 caves and shelters as well as 1,800 improvised explosive devices have been destroyed so far during the operations.

Turkish authorities use the term "neutralized" to imply the terrorists in question surrendered or were killed or captured.

The terrorist PKK often uses bases in northern Iraq, just across Turkey's southern border, to plot terror attacks in Turkey, and the YPG/PKK has tried to establish a terror corridor in northern Syria, targeting both Turkish soldiers and border areas.

Turkey has carried out a series of offensives since 2019 against terrorist groups in northern Iraq, particularly the PKK. The latest operations are Pençe-Şimşek and Pençe-Yıldırım launched this April in the Metina and Avasin-Basyan regions. Earlier, Turkey launched Operations Pençe-Kaplan and Pençe-Kartal in June 2020.

Also, since 2016 Ankara has launched a trio of successful anti-terror operations across its border in northern Syria to prevent the formation of a terror corridor and enable the peaceful settlement of residents: Euphrates Shield (2016), Olive Branch (2018) and Peace Spring (2019).