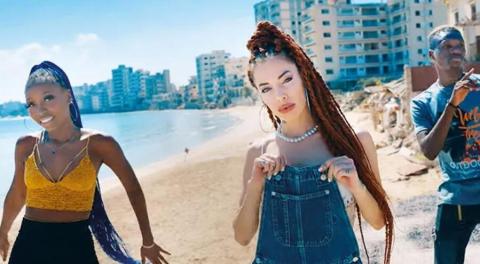 Ersin Tatar said in a statement that he met online with Nihayet Elibol, who was targeted by the Greek Cypriots after she released a clip of her song, Bulaman, in the abandoned town which was known as a ghost town - cut off from the world for 47 years.

Maraş was abandoned after a 1984 UN Security Council resolution that said only original inhabitants could resettle in the town.

Entry was forbidden except for Turkish army personnel stationed in the TRNC.

Tatar congratulated the 32-year-old singer known by her stage name, Nini, as well as her team for the video clip in Maraş.

He said the inhumane attitudes toward Elibol, who was subjected to threats and insults by Greek Cypriots, were the product of a bigoted mentality.

Noting that her song did not have any political concerns, Tatar said there was no logical basis for the attacks because the location was Maraş.

He said that mentality, that cannot tolerate even a song, is the biggest threat to peace in the region and the world, while pointing out that art is a universal language of world humanity.

"Tolerance to art and differences is one of the most important phenomena of civilized life," he said.

Elibol thanked Tatar for his support and noted that her song was taken off the air because...